Surfing Benefits Veterans, Yep You Heard Right… When military veterans learn how to catch a wave, they catch so much more, as activity clears the mind, gives them a chance to reflect and, ultimately, see solutions.

It comes as no small wonder, then, that non-profit organizations like Waves of Impact and the Semper Fi Fund joined forces recently to run their second surf camp in California. Twenty-Five (10 from local southern California) service members from the Semper Fi Program participated in an expert level instructional camp for all ability levels to be challenged by the waves at the World Famous Churches surf spot.

Volunteers spent hours with veterans, providing surfing tips to participants from all military branches and ensuring use of correct techniques. 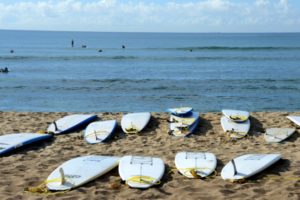 As veterans’ motivation grew, their fears and feelings of limitations subsided, and what remained were feelings of pure joy in their achievements. The common experiences they share as recovering veterans, and the activity itself, solidified a bond among them.

Waves of Impact, founded by Lovgren and Josh Harper of Laguna Niguel, sets up surf camps for wounded warriors and children with disabilities. Lovgren and Harper met at a children’s surf camp and realized the benefit surfing could have on veterans.

“Some of the guys feel limited by their injuries,” said Sam Tickle, a former Navy helicopter pilot and now director of Team Semper Fi. “Being out here is equal parts camaraderie — it’s being around fellow veterans that get it — and it’s learning a new skill.”